11 Fascinating Waterfalls in the World 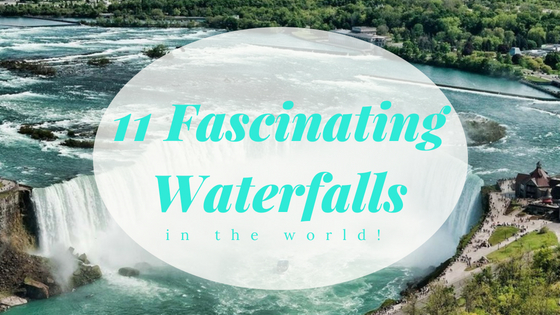 I absolutely love waterfalls! The beauty and greenery surrounding it, the sound of the water falling and splashing into the rivers and pools below – just makes me happy. Have a look at a few of my favorite and 11 of the most fascinating waterfalls in the world!

The world’s highest uninterrupted waterfall, Angel Falls, is located in Venezuela with a height of 979 metres! It is one of Venezuela’s top tourist attractions and in the drier months, less water can be seen flowing.

Jog Falls or Gerosoppa Falls is located in Karnataka, India and ranked 13th in the world waterfall database. It is the second highest plunge waterfall in India. Depending on the season and rain, this waterfall changes from a segmented waterfall to a plunge waterfall.

With the falls coming to a halt in the late summer and fall seasons, Yosemite Falls (upper) is among the twenty highest waterfalls in the world. At its peak in late Spring, the Yosemite Falls drop at a height of 739m.

Apparently formed in the last ice age, Rhine Falls is Switzerland’s largest waterfall. Conveniently accessible by vehicle, the falls can be viewed by viewing platforms on both sides and tourists can enjoy guided tours.

Iceland boasts some of the most picturesque waterfalls in the world, with one of them being Seljalandsfoss Falls. It is located in the south region and is part of the Seljalands River. There is a walkway behind the falls which leads to a small cave.

In all its beauty, Niagara Falls is made up of three waterfalls located on the boarder of Ontario, Canada and New York, USA. There is a distinct horseshoe shape in the falls which lies on the side of America. Being a huge tourist attraction, there are many tours and viewing options available.

Bordering Zambia and Zimbabwe on the African continent, Victoria Falls is the largest waterfall in the world based on its width. Located on the Zambezi River, one of the most sought after experience by tourists is the Devil’s Pool, near the edge of the falls – deaths have been reported when people slipped over the edge of the falls!

On the border of Argentina and Brazil lies the Iguazu Falls of the Iguazu River. The falls can be accessed from both countries as well as Paraguay. The two national parks surrounding the Iguazu Falls are both UNESCO World Heritage Sites.

Containing a series of plunge pools, Havasupai Falls of Havasu Creek is one of the more popular falls in the Grand Canyon. It is widely sought by hikers and photographers for its adventure and beauty. A picnic area and campground is located nearby for tourists.

0 thoughts on “11 Fascinating Waterfalls in the World”