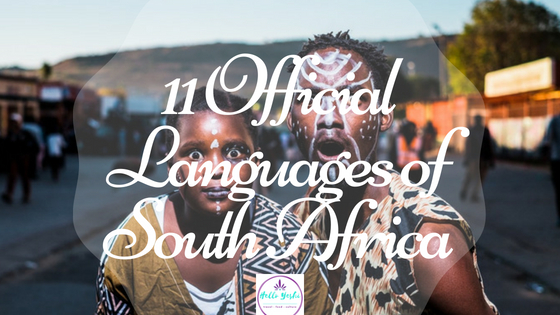 Zulu is the language of the Zulu people and it is the most common language in South Africa. More than 24% of South Africans claim Zulu as their mother tongue and more than 50% of the population understand Zulu.

The Xhosa originated from the Eastern Cape region and have a complex language characterised by clicking sounds which are formed by the tongue, denoted by c, x, and q.

Afrikaans originates from Dutch vernacular (South Holland) and is a West Germanic language spoken in South Africa since the 18th century when the Dutch settlers arrived in the Cape. This is the third most spoken language in South Africa.

English was introduced to South Africa in 1795 when British colonizers established a military operation at the Cape. Our modern day English can be is known as South African English (SAE) and it is most commonly spoken in official and commercial public life.

Sepedi contains more than 30 dialects and it is the language of the Pedi people of the Mpumalanga and Limpopo regions of South Africa. Urban varieties of Northern Sotho, such as Pretoria Sotho (actually a derivative of Tswana), have acquired clicks in an ongoing process of such sounds spreading from Nguni languages.

Tswana is Botswana’s national language with majority of it’s speakers found in South Africa. This is the first ethnic South African language to be translated into written form.

Sesotho originated from the Mountain Kingdom of Lesotho and is often referred to as Southern Sotho. It is the national language of Lesotho and while this complicated language will be foreign to most, its true beauty can be appreciated with a little effort. The words have a melodic flow when spoken fluently.

Xitsonga is spoken by the Batsonga people (also called the Shangaans) in the Limpopo Lowveld. The language of what is believed to be the last ethnic African group to settle in South Africa, along the northern border of the Limpopo River.

Originating in Swaziland and the official language of the Kingdom of Swaziland, siSwati is spoken by a third of the people of Mpumalanga. In 1750, the Swazi successors in South Africa decided to relocate, heading north towards what is today known as KwaZulu-Natal. The Swati Language bears some similarities to Ndebele, Xhosa and Zulu and they are often confused by those with an untrained ear.

Tshivenda is the language of the Venda people in the Mapungubwe area of Limpopo. The Venda are culturally closer to the Shona people of Zimbabwe than any other South African group. Those that speak Tshivenda have a royal family line, and adhere to strict traditions that relate to this connection.

The Ndebele people live mainly in Limpopo and Mpumalanga, but can also be found throughout Gauteng. A large proportion of South African folk are able to speak Ndebele. It is known as a beautiful language, melodic on the ear. Their language may be separated into the chief dialects. These are Southern Ndebele and Northern Ndebele.

To learn more about South Africa, check out my other posts:

South Africa – Why you need to visit now!