The Reality of Culture Shock 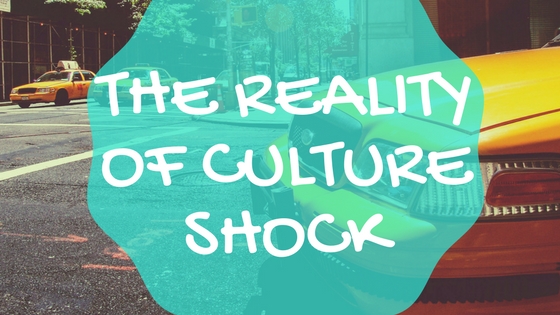 For first time travelers and seasoned travelers, the term “culture shock” may have been heard and experienced. I remember the first time I heard it, I thought I had seen it all on TV so moving countries would not be a big deal or bother me much, but I was not fully prepared until I experienced it and lived in a country and society I was not all too familiar with.

What is Culture Shock?

According to Wikipedia: “Culture shock is an experience a person may have when one moves to a cultural environment which is different from one’s own; it is also the personal disorientation a person may feel when experiencing an unfamiliar way of life due to immigration or a visit to a new country, a move between social environments, or simply transition to another type of life.”

Over the years, growing up in South Africa, I assumed we were with the times in terms of business, fashion, food, social events and interactions, music festivals, open-mindedness (etc.) and general norms. We had come a long way with LGBT communities, HIV/AIDS communities and just being accepting of all – we are a rainbow nation after all.

Personally, I felt that I was mentally prepared to move to the USA. I had done my research; got all the information I needed and had the support of my family and friends. I was ready to make the move. Until I actually made the move!

To a certain point I was at ease with the culture, people were friendly and easy to get along with once they got to know you. The most hard-hitting shock was when I got to the suburbs – homes and properties weren’t fenced. In South Africa, it’s rare to see a residential property without security fencing! Yet, in USA, people can walk right up to your front door and leave parcels which nobody else touches! It also amazed me that it was fairly safe to stay out late using public transportation to get back home.

There were many other things that I was not comfortable with at first – but I think I really did work my way through the culture shock!

There are 4 phases of Culture Shock:

1. The Honeymoon Phase – this is when everything is seen in a positive or romantic light.  Everything is overwhelming and you are in a bubble with everything seeming captivating and exciting!

2. The Anxiety/Negotiation Phase – differences become apparent, the language you were infatuated with during the honeymoon phase has become vexatious. The excitement has died down, not everyone is as eager to be your friend. You tend to become uncomfortable in situations, making you feel lonely and homesick. Airing these thoughts and views with friends and family back home, as well as new friends – having an open communication – helps you negotiate your comfort in your new environment.

3. The Adjustment Phase – People and places become familiar, you’ve settled into a routine, your attitude towards the new culture and environment starts becoming positive. You may find little things that you like doing, that draws your attention and mindset away from everything that makes you uncomfortable.

I did not become homesick until my ticket to come back home was purchased, which was approximately one month before I would leave the US. I was so done with everything, I just wanted to see my family, eat home food, and get my hair properly oiled by my mum (Indian tradition)! And then I got home, and was in for an even bigger shock that what I experienced going to the US!

What is Reverse Culture Shock?

Wikipedia says: “Reverse culture shock takes place upon returning to one’s home culture after growing accustomed to a new one. These are results from the psychosomatic and psychological consequences of the readjustment process to the primary culture. The affected person often finds this more surprising and difficult to deal with than the original culture shock.”

Coming home was unlike any other experience. I felt disconnected – from family and friends, I found it hard to keep up with everything going on in South Africa. Politics changed, our economy change – I felt that prices of things were too high, celebrities were in the news for all the wrong reasons, the weather had become so much hotter – so many things! I eventually went through all those culture shock phases again to become accustomed to being home.

My experience living abroad and adjusting to life on my own is pretty amazing – at least I think so!

0 thoughts on “The Reality of Culture Shock”