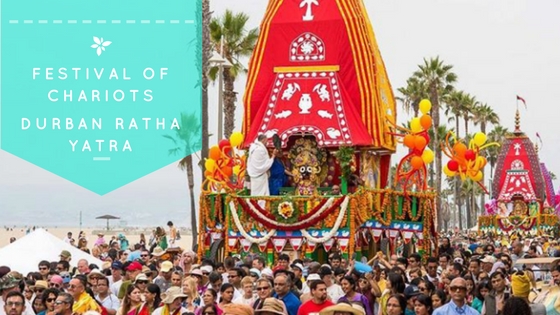 The Durban Ratha Yatra or the Festival of Chariots as it is more commonly known is a celebration where chariots carrying Lord Jagannath, Baladeva and Subadra are pulled through the streets of Durban.

Historically (1980s) the Festival of Chariots took place in Tongaat, North of Durban in which only two chariots were pulled and this attracted approximately 10 000 people. The festival was then moved to Chatsworth where the Ratha Yatra was pulled from the Sri Sri Radha Radhanath Temple to Unit 3B soccer stadium where the festivities continued. As the festival grew, it moved centrally to Durban where the Ratha Yatra is now held near Durban’s beachfront and now there are three magnificent chariots. The festival takes place over four days (Friday, Saturday, Sunday and Monday), attracting almost 200 000 people to the celebrations.

Traditionally, and as it happened this year, the Durban Festival of Chariots takes place over the auspicious Easter weekend. The parade starts opposite the Tropicana Hotel (upper Marine Parade) and comes to rest at the festival site which is located at the old Durban Drive-in. The route to the festival site is 2.8kms and from the site is 1.5kms.

The Durban Ratha Yatra captivates hundreds or thousands of people from all walks of life to celebrate this Festival of Chariots. Growing up, I attended this festival many times, always being told that if I pull the chariot or touch the rope or chariot, I will be immensely blessed. I strongly believe that I am but attending the festival over more recent years, taught me about sisterhood and brotherhood, about helping those irrespective of colour, background, beliefs or status. The Festival of Chariots shows you what it is to shed your inhibitions to help serve our amazing community, to serve those in need and also to help those that think they don’t need help.

I will continue to attend the Festival of Chariots for many years to come; it has become tradition and holds a very significant place in my heart.