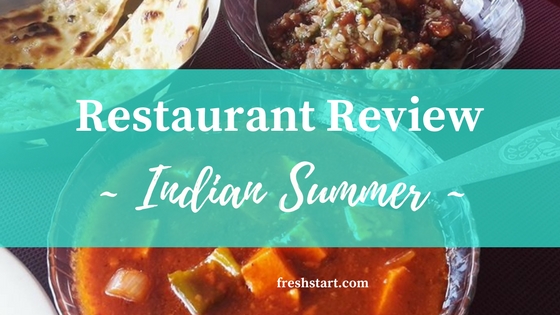 My mum (Mumma Bear) and I usually do the mother-daughter thing around month end. We choose a weekday (less busy) to pay our accounts, get some shopping done and eat a nice meal – just us two. Today we visited La Lucia Mall and I was in the mood for something Paneer! Mumma Bear usually let’s me decide where we eat since I’m her favourite as opposed to my sister!

I’ve read/heard some good things about Indian Summer and have never been before. Since we were in the vicinity, it was the lucky choice. It was easy enough to find with ample parking space (for a lunchtime crowd). We were greeted by a polite and friendly host/server and were seated with a nice view of the ocean.

The menu was filled with Paneer dishes for me to indulge in, and then some. We opted for the Potato Samoosa as starters. I ordered the Paneer Schezwan with Fried Rice and Mumma Bear ordered a starter portion of Gobi Manchurian with a Garlic Naan. Service was a little slow, which owing to the multiple phone orders was understandable.

The Potato Samoosas were the standard, ordinary potato samoosas – the one with yellow potato filling, nothing extravagant but tasty nonetheless. Mumma Bears Gobi Manchurian (starter) was almost the same size as my Paneer Schezwan – which made me think either the starter was a large portion or the main was a small portion.

We dug in and immediately I could tell that the chef knew he’s Indo-Chinese flavours. The Paneer was soft (with a good consistency) in the garlicky Schezwan sauce. It was spicy, sweet and tangy all in one which, coupled with the fried rice – just hit the (indulgent) spot. Of course, I had to have a taste of Mumma Bear’s Gobi Manchurian, it was a hit! The right blend of spices, shredded veggies and sauce/gravy made it the best Manchurian I’ve ever had.

At R160 (+-$13) for the entire meal, Mumma Bear and I had good helpings (enough to warrant a nap time after lunch), and still took a small portion away. I have yet to try out the non-veg dishes however Indian Summer comes in highly recommend by myself