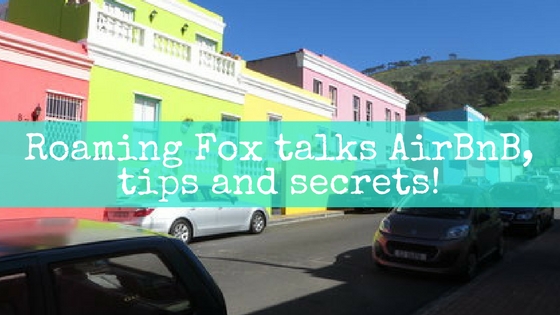 A couple of months ago I had my first experience staying in an Airbnb. The accommodation was booked in advance with the intention of only four people using it. We were going to Cape Town and because of circumstances, I was invited at the last minute and tagged along as a fifth wheel. Yes, unfortunate hubby had to keep the home fires burning.

We stayed in three very different types of accommodation. The first was a contemporary loft apartment in the centre of Cape Town. The second was a suite of rooms attached to a private house just outside Stellenbosch. In Fish Hoek at our third and final Airbnb, we stayed in an apartment overlooking False Bay.

We explored in and around Cape Town. So many memories came flooding back as we drove around. Not that I haven’t been back to Cape Town since my youth, but some areas I haven’t seen for ages. Most of the time the weather was kind to us. Anyone who knows the Cape, the weather can play havoc at the best of times, but on a beautiful day, the Mother city fluffs her feathers and struts her stuff.

SO, WHAT ARE THE COOL THINGS I EXPERIENCED AT AN AIRBNB?

1.       Staying in a re-purposed Art Deco building. It had been renovated from an old office building into apartments but some of its original structures were still there. It’s quite remarkable how smell brings back memories. As we stepped into the main entrance hall of the building, the odour of marble jolted me back to my childhood days. I can remember accompanying my mother and being totally bored with some important, tedious business she had to attend to. At least, it was boring for me but I can clearly remember being fascinated by the huge slabs of different coloured marble. I was captivated by the cool, shiny surfaces and all I wanted to do was trace the patterns on them.

2.       Interacting with the owners of their guest house and being able to take over their kitchen and living area. Our rooms only had facilities to boil a kettle and had a small bar fridge. We were invited to take over the kitchen and even the braai (barbeque) area if we wanted. We could also swim in their private pool, although that was one occasion the weather didn’t play along.  It felt quite strange to take over someone else’s house but it added to the experience of staying in that house. The owners were very friendly and made us feel so welcome.

3.       Riding in really cool and unexpected stuff. The apartment in Fish Hoek was in a building on a steep slope of the mountain. As we were greeted by our hostess in Fish Hoek she took us through a door into the property and proceeded to surprise us with a short ride in the cutest little funicular. Such fun but I was highly disgusted that it only lasted for about 30 seconds.

A COUPLE OF OTHER TIPS AND SECRETS:

Tip: I know where to get the best dessert in Stellenbosch. Decadent and delicious, the sweet treats at The Stellenbosch Kitchen would entice any depraved soul. The rest of the meal was equally delicious.

Not so surreptitious secret: The best view in Cape Town is of course from the top of Table Mountain. On a clear day that gives you a 360-degree view of various parts of the city and some of its suburbs as well as the sea. But that shouldn’t be the only place you would go to for a spectacular view. Take the time to drive around because there is something worth looking at, no matter which little nook and cranny you enter. If you venture to the Cape Flats, you might also be surprised by a few interesting sights.

Sit closer and read carefully! What I’m about to disclose, I tell you in confidence, so I trust you not to spread it around:

At the loft apartment in the city centre, there were only two double beds. Short of squeezing in between either of the two couples, I relented and slept on the couch, complete with my own bedding. I woke up feeling quite refreshed in the morning. Roused by the view of Table Mountain eased any discomfort I might have imagined.

In the suite of rooms at Stellenbosch I felt like the bee’s knees, because I had my own room and my own bed. No worries there and pleased as Punch.

The apartment in Fish Hoek was however a completely different story. Luxurious, spectacular views, a kitchen to die for (which we never really used) and endless space to get lost in. In fact, I could have moved in permanently. There was however, a tiny problem. There were only two bedrooms. The couches in the living area were a bit cramped and I would have entangled myself and ended up with my feet wedged behind my head. We were told there was a sleeper couch in the main bedroom where an additional two small children could sleep. Guess where I slept? You’ve got it! I shared the romantic bedroom that my son and his other half chose. I dug a burrow, nestled in and made myself comfy on the kiddie’s couch. Serves them right for inviting me at the last minute. I will confess, we were so exhausted after all the sightseeing that I think the three of us set up a harmonious chorus of snoring – I’m sure it wasn’t only me.

I hope my four traveling companions won’t complain and pass comments about all the space I took up with my huge bag of luggage, when five of us were squashed in a sedan car, boot bulging and each of us with a pile of baggage as well as camera gear on our laps…and a few bags of souvenirs to top it all.

Credits: A huge thank you to Roaming Fox for providing this guest post.

*All pictures and words courtesy of Roaming Fox.