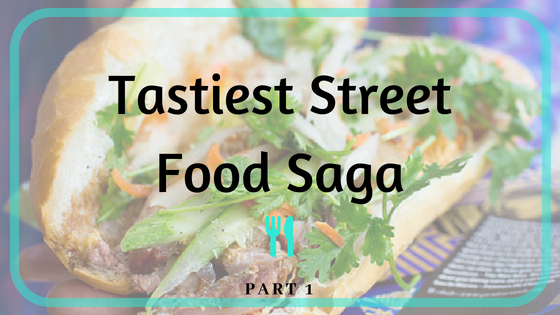 Who doesn’t love street food!? It’s fast and easy, tastes divine and is usually pretty cheap! I’ve tried almost all, save a few. In this Tastiest Street Food Saga, we take a look at the Bagel, Jerk Chicken, Bánh Mi, Currywurst and the Bunny Chow.

Street Food from around the World!

Bagels originated in Poland? This is new to me! I’ve always believed the Bagel hailed from USA but I guess they just made it famous! The Bagel originated in the Jewish community in Poland. Bagels are made from a yeast-wheat dough and shaped as a ring. My favourite has to be cinnamon honey bagel with cream cheese!

Possibly the only “Indian” food, that did not originate in India. The Bunny Chow or Bunny as it is known locally, originated in Durban with the South African Indians. It consists of a hollowed out piece of bread (usually a quarter or half of a loaf) that is filled with curry. Curries vary from vegetarian (beans or mixed veg) to chicken and lamb and it is usually served with a side of salad; and is to be eaten with your hands! This has become a firm favourite for travellers visiting Durban, South Africa.

“Jerk” is a mix of dry spices (pimento & Scotch bonnet peppers) that is a marinade used in Jamaican cooking. In this case the marinade is used to make Jerk Chicken which is prepared over a pit fire or oil barrel halves. Throughout Jamaica, Jerk Chicken is widely available however; you won’t get traditional Jerk recipes as it is kept very secretive!

Bánh Mi is dubbed as the best sandwich in the world, up against a Cubano and Panini! Made with the French Baguette, and a variety of fillings. Bánh Mi is usually slathered with mayonnaise and pâté. Some of the popular fillings include barbecued pork, Vietnamese-style pork meatballs, duck, Vietnamese salami or chicken liver.

Served with a side of French fries, Currywurst is pork sausage or Bratwurst which is steamed, fried, sometimes cut into slices and seasoned with curried ketchup and topped with curry powder. It is the favoured street food of Berlin and can be enjoyed throughout Europe.

Keep an eye out for your favourites in the next edition of my Tastiest Street Food Saga!