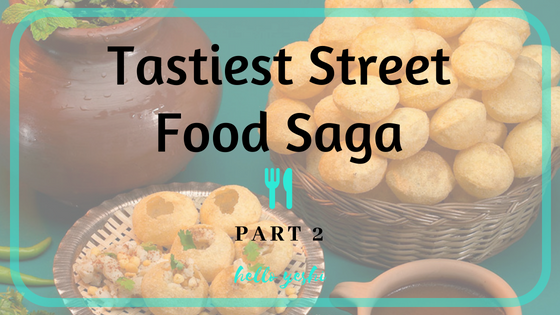 Who doesn’t love street food!? It’s fast and easy, tastes divine and is usually pretty cheap! I’ve tried almost all, save a few. In this Tastiest Street Food Saga, we take a look at Dürüm, Pani Puri, Funnel Cake, Dim Sum and Empanadas!

Check out Part 1 of my Tastiest Street Food Saga!

Street Food from around the World!

A dürüm is a Turkish wrap (Lavash) usually filled with döner meat (chicken or beef kebab). It is common street food especially in Istanbul and is a complete meal consisting of bread, meat and vegetables – also served with a yogurt based sauce for dipping.

Pani Puri is a familiar street snack in many places in India. It is a fried, hollowed out puri consisting of potatoes, onion and chickpeas. This is served with a coriander chutney and tamarind or date chutney. There are many variations of Pani Puri, sometimes also served with sev and yogurt. Pani Puri is to be eaten in one bite!

This popular street food is usually found at US fairs, sporting events and carnivals. It is made when the batter is deep fried in a circular pattern. Its origins are to the Persian regions which spread through Europe. The name funnel cake came about by the method of pouring the batter into the hot cooking oil.

Dim Sum is small bite-sized portions of steamed or fried savoury dumplings, containing various fillings. Dim Sum is a Chinese dish that is usually served with tea in Cantonese teahouses. Fillings include beef, pork, chicken, prawn and vegetarian options. Dim Sum is best enjoyed being shared with family and friends.

An empanada is a Spanish or Latin American turnover filled with a variety of savoury ingredients; it is then either baked or fried. Fillings include meat, cheese, corn and other ingredients. They are though to have originated in the northwest regions of Spain. Empanadas can be enjoyed as a snack or a meal.