to be born a girl child. 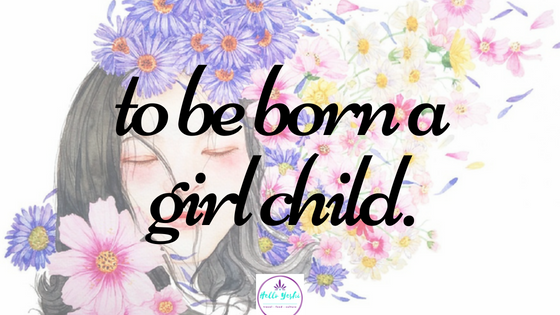 In some parts of the world, not every girl baby makes it to birth. Some girls who make it to birth, are then sold as slaves, trafficked or married off before they even know the meaning of childhood. This isn’t something of the past, it is still happening today. In a world where we have made so much progress, where women are business owners, CEO’s, engineers, lawyers, pilots, doctors, scientists – where we now are leaders, this bullshit is still happening.

To be born into an Indian community in South Africa, as a girl child, still came with some taboos, but we are sheltered from the harsh realities that take place in parts of India and Africa (and other countries too). Those harsh realities that include Child Marriages, Female Infanticide and Sex-Selective Abortions, Female Genital Mutilation, Honour Killings and Extreme Discrimination in Society.

UNICEF indicated at least 200 million girls and women in 30 countries have undergone genital mutilation; 700 million women were made to marry during childhood. According to UNESCO, 63 million girls around the world have no primary or lower secondary education. Many women are being deprived of their reproductive rights. Every year, 22 million women and girls must undergo abortions in unsanitary conditions, putting their health and their lives at risk.

Having a period, being emotional, and not being as physically strong does not define us, and it gives nobody the right to judge us, put us down or make us feel inadequate. Too many of us, are oppressed, abused and violated. Even if you won’t speak up, even if you are too embarrassed to say anything; still to – stand up for yourself. Don’t let your silence be mistaken for your weakness. Fight back, or simply walk away because that is how we will set a precedent for every girl child to know that she is better.

So let’s all keep fighting this fight of Female Empowerment, Gender Equality and Women’s Liberation and Rights. As women, let’s lift each other up, stand up for each other and support each other. As men, your fight and understanding with us, is every part as important in our fight. We are your the mothers, wives, sisters, daughters, grand-daughters and nieces that will one day make life that much sweeter. Let’s fight together to be more, to be better, and sometimes just to be enough.

0 thoughts on “to be born a girl child.”