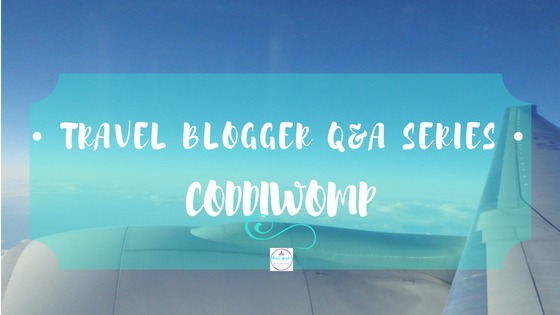 Travel Blogger Q&A Series – These are the amazing people that travel the world and share their stories on their blogs. Through this series, I aim to share a better understanding of travel bloggers apart from their blogs – a little more on the personal side of travel! Join me in this interview with Danny from Coddiwomp!

Danny is a travel enthusiast with a passion for writing. His ultimate goal is to use his blog, Coddiwomp, as a means to share his love of travel with a wider audience, to inspire others to do it for themselves, reap the incredible rewards that travelling offers and, ultimately, to help himself and others live a full and amazing life.

He’s currently based in Bristol, UK, where he’s trying to turn that goal into a reality!

What is your earliest travel memory?

My earliest travel memory is probably a family trip to the United States when I was 6 years old. Unfortunately I don’t remember all that much these days, but I know we did some cool stuff, like heading to Universal Studios and enjoying the excitement of Disney World.

One of my abiding, but loose, memories is of a coastal drive we did. I think it would have been the West Coast, but though I have no idea how far we drove, I do recall stopping at a café along a particularly amazing stretch of road. It overlooked a bay where someone told me whales would come at a particular time of year. Now, we didn’t see any. But just the thought of it captured my imagination and has stayed in my head ever since!

I think the wonder of that trip must have whetted my appetite for future travel!

Have you ever cried at the airport?

Amazingly, I actually don’t think I’ve ever full on cried at the airport! There have definitely been times when I could have though. The first would have been when I caught the plane to Sri Lanka, where I was heading for a mental health placement at the time.

It was my first time travelling fully alone and I had no idea what I was getting into. I wasn’t even fully confident that I knew how to navigate the airport! I was so nervous that I couldn’t eat before I left. Saying goodbye to my parents at the gate wasn’t easy!

What is your travel style?

I’m a pretty budget backpacker style traveller, with the occasional expensive experience thrown in to the mix!

What is your favorite city?

I’ll start by saying I’m not a big fan of cities…which is ironic, as I’ve lived in them my entire life. I’m more of a quiet, laid back country/beach sort of person by choice! However, I’d probably say London, UK. It is by no means the perfect city- it is big (too big) and busy, and hectic and loud and polluted and expensive.

But it’s also lively, atmospheric, buzzing and full of insanely awesome things to see and do; not to mention having thousands of years of history behind it. I also love how diverse it is: in London you have rich and poor co-existing side by side; people of all colours and backgrounds living next door to each other. It is a lovely, liberal and open minded city.

What’s the weirdest thing you carry when traveling?

The weirdest thing I carry when I travel? That’s hard. I try not to carry too much stuff. However, one thing I carried around in New Zealand (and still have with me) is a small stone that I found on the shore of Lake Wanaka, on South Island.

I noticed it on a walk one day. Someone had taken the time to draw a rather haggard, scary looking face on the front, with a crown on its head. The other side of the pebble is signed- presumably by the artist.

I don’t know why I was drawn to it, but I picked it up and have kept it ever since…3 years later it’s now on my windowsill!

What’s the most adventurous thing you have done on a holiday?

One of the most adventurous things I’ve done was an overnight jungle hike in Cambodia last year. We were in the wilds of the East and wanted to escape tourists. This was the perfect way to do it!

The hike was especially long or strenuous, but it poured with rain, we crossed white-water rivers, fished with handmade bamboo rods, cooked in bamboo over fire, slept in hammocks and just generally felt immersed in nature. It was an amazing experience.

What do you collect when traveling?

I actually don’t collect anything physical when I travel! The closest I could get to an answer here would be ‘experiences’…but that’s too cheesey and cliché to count!

If you could time travel, which era and area you choose?

I’ve often thought about this. I’d probably say back to Roman times. I’d just love to go and experience life in the peak of the Roman Empire, just to see what it was like!

What your favorite international meal?

My favourite international meal…wow. That’s tough. You never fail to discover some new and wonderful culinary experience when you travel somewhere. However, one of the best was in Sri Lanka, where I discovered Chicken Kottu. It’s hard to describe, but just know it is absolutely divine!

What do you miss about home when traveling?

It’s all too easy to just say friends and family here. But, if I’m honest, I don’t think that would be true. When I travel I tend to become pretty involved in what I’m doing, and don’t think too much about life back home. Of course, you’ll always get a little homesick at times, but generally speaking I’m happiest when I’m on the road.

To answer the question though, I’d probably say the structure and routine. Now, that same structure and routine is generally what makes me want to get away from home in the first place. However, life on the road can be tiring, unpredictable and generally fast paced- routine often slips by the wayside. So over time, the sense of purpose that often accompanies the routines we establish at home becomes more appealing!

The grass is always greener, right?!

How does travel make you feel?

Where is the best party scene?

So I’m not a big one for party scenes when I travel. However, I had undeniably awesome times partying on the white sand beaches of Aragum Bay, on the eastern side of Sri Lanka! It was just the combination of being on a beach, with the incomparable beachside atmosphere, having a great time with friends and partying into the early hours.

My favourite travel related book is Vagabonding by Rolf Potts. It’s essentially a beginner’s guide to travel, but Potts talks about a specific type of travel: vagabonding. The book borders on philosophy and his lessons on how travel should be done are second to none. Anyone considering travel should read it.

I’ve been pretty lucky here- most advice I’ve received on the road has been pretty spot on!

What’s your ritual when you get to new destination?

Oo, nice question. The simple answer is that I don’t have one! But I like the idea of establishing some. The next time I go away I’ll sort my rituals out and get back to you!

Be sure to check out and follow Coddiwomp here:

If you would like to participate in my Travel Blogger Q&A Series, email me on infohelloyeshi@gmail.com for more details!

Travel Blogger Q&A Series –The World Through My Eyes